Incitement and terrorism have been a longstanding concern and a source of tension between Israelis and Palestinians. Typically raised by Israeli leaders, and Israel’s supporters in the U.S., incitement is commonly understood as a form of extreme hate speech and discourse that promotes and encourages violence and terrorism, or even the denial of Israel’s right to exist.

The most common charge of incitement focuses on official statements or content generated by government or political party sponsored media. For example, as part of the Oslo process, Palestinian leaders committed to foreswear violence and recognize Israel, though it was not long before charges of incitement began to seep into bilateral relations.

Palestinian leader Yasser Arafat often invoked Palestinian “martyrs” or called for “jihad,” rhetoric Israelis considered incitement. In a more recent example, Palestinian officials honored Dalal Mugrabi, one of the masterminds of a notorious terrorist attack in Israel in 1978 in which dozens of Israeli civilians were killed, including children. Some Palestinian leaders and civil society figures, including the late Faisal Husseini, have called for the “liberation” of Palestine from “the river to the sea,” rhetoric Israelis consider incitement.1 See “Mystery surrounds Faisal Husseini’s Last Interview,” Danny Rubinstein, Haaretz, https://www.haaretz.com/1.5344834 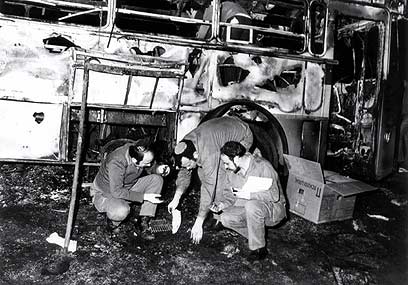 The aftermath of the Dalal Mugrabi attack known as the Coastal Highway Massacre (IDF/Spokesman Unit, 1978) 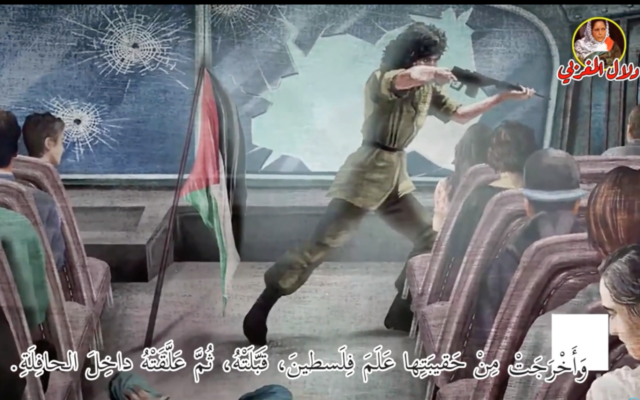 An online-learning Arabic language lesson uploaded by a teacher at a PA-funded school in Hebron which glorifies the 1978 Coastal Highway Massacre (Times of Israel, 2020) 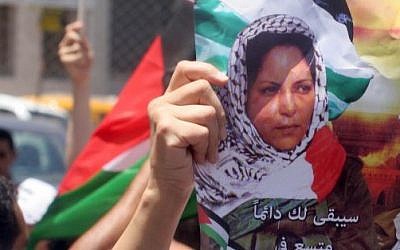 The PLO’s official insignia includes a map of “Palestine,” that does not include Israel, and the Fatah party—the most important Palestinian political party within the PLO and President Abbas’ political home—has rifles in its crest. Many Isralies consider these symbols to be a form of incitement.

Beyond the government and recognized Palestinian authorities, there are further concerns about incitement that are regularly raised. Palestinian extremist and terrorist groups, like Hamas and the Palestinian Islamic Jihad, are regular sources of incitement to violence via statements of their leaders and media outlets.

U.N. social service agencies, like UNRWA, also receive criticism for allowing incitement and hate speech from their platforms or via their educational institutions—though the U.N. rejects such charges, pointing to their own corrective measures and to U.S. and member state oversight.

More broadly, there is criticism that incitement is rampant in Palestinian social, popular and mass media.2 See reports by the Jerusalem Center for Public Affairs, https://jcpa.org/the-knife-and-the-message-the-roots-of- the-new-palestinian-uprising/incitement-on-social-media-the-fuel-and-detonator-of-palestinian-violence/, and the Washington Institute for Near East Policy, https://www.washingtoninstitute.org/uploads/Documents/pubs/PolicyFocus124_Incitement.pdf There is also vociferous condemnation of what critics call “pay to slay,” the practice of payments to the families of Palestinians who commit acts of violence and terrorism. Palestinian leaders would be wise to tackle this issue in a more serious and transparent manner and put an end to payments that directly benefit perpetrators of terrorism.

Palestinian leaders have generally rejected criticisms about incitement, pointing to their repeated, official condemnations of violence, and the intense oversight and scrutiny of the international donor community for nearly three decades. Avoiding censorship or protecting freedom of expression are also common responses.

Moreover, Palestinian leaders sometimes dismiss concerns about incitement, claiming the arguments are made by Israelis who are against peacemaking and are looking for a convenient excuse to avoid compromise. 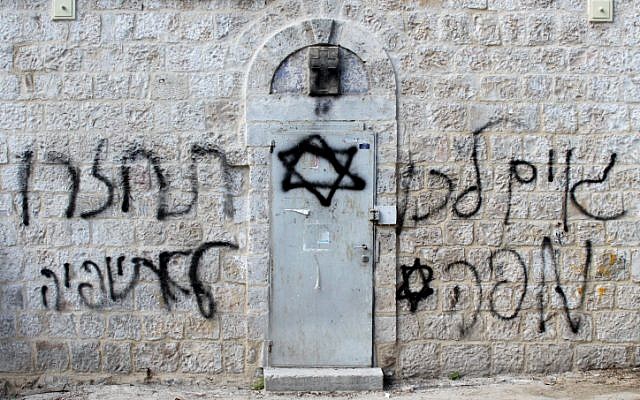 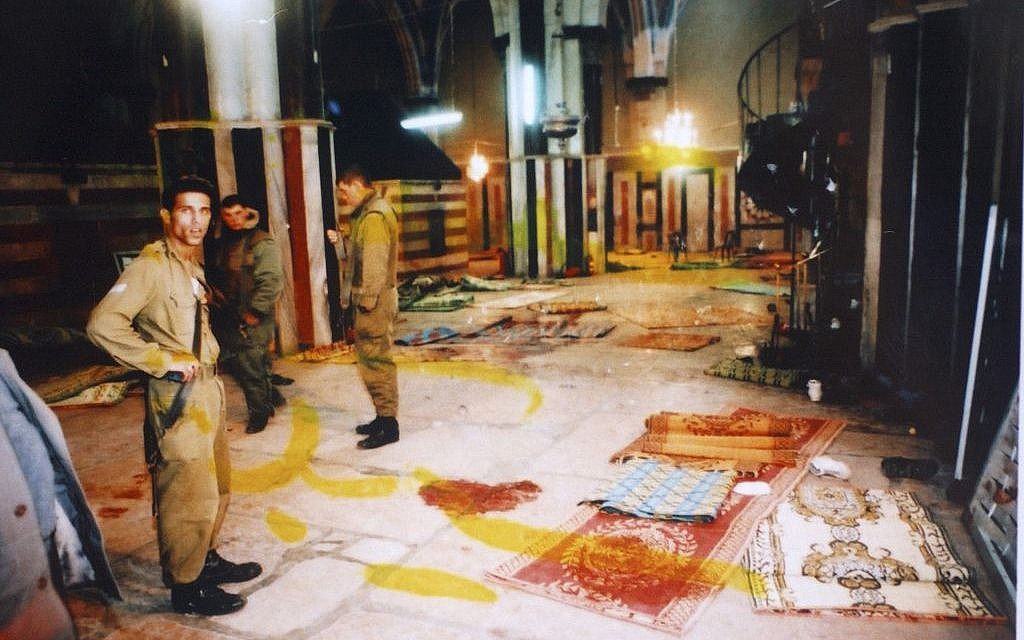 Israeli soldiers stand next to blood stains on the floor of Yitzhak Hall in the Tomb of the Patriarchs following the Hebron Attack (Flash90, 1994)

Policymakers have struggled for years to turn concerns about incitement into clearly defined standards and effective policy solutions.

Second, the U.S. supported the establishment of a trilateral U.S.-Israel-Palestinian “anti- incitement” committee, which was comprised of experts and met for 1-2 years, though the body was unable to produce any meaningful outcomes. In fact, the work of the committee laid bare that the parties could not agree on a definition of incitement or what specifically should be done about it.

Still, Israeli leaders have continued to raise the concern regularly—in terms of official Palestinian Authority actions, statements and actions by other Palestinian actors, and also in the context of U.N. supported educational and social programs—and the U.S. and the international community regularly repeat these concerns, though little concrete action has been proposed in recent years.3 See Jerusalem Post, “UN Expresses Rare Criticism on Palestinian Hate Speech and Incitement,” for a report on the 2019 report of the United Nations Committee on the Elimination of Racial Discrimination

American leaders, both Democrats and Republicans, have regularly spoken out against incitement. After a horrific attack on Jewish worshippers at a synagogue in Jerusalem in 2014, Secretary of State John Kerry condemned “incitement…(and) calls for ‘days of rage…(which are) unacceptable.”4 See https://apnews.com/dc225aa303c94ae9bebde273ce3764bb/john-kerry-condemns-attack-jerusalem- synagogue, November, 2014. President Trump has raised the issue repeatedly, calling on Palestinians to “speak in a unified voice against incitement to violence and hate” when he first met with PA President Abbas in Washington. In releasing his peace plan in January 2020, Trump called for “ending the incitement of hatred against Israel.”

Although Israeli leaders gave less priority in the past to the PA’s “welfare” payments, following the passage of the Taylor Force Act in 2018—named for an American graduate student and military veteran who was murdered by a Palestinian terrorist in Tel Aviv in 2016—direct U.S. government economic assistance to the Palestinian Authority was suspended unless and until Palestinian officials end such payments.

Israel passed a similar law aimed at curtailing “pay to slay,” which allows Israel to withhold and deduct the amount of money the PA provides in such payments from the taxes and tariffs Israel collects on the PA’s behalf.

Making it clear that there are no official PA policies that incentivize violence is critical to building trust and restoring faith in Palestinian governing institutions. Exclusively employing income-based and other acceptable formulas to establish eligibility for social welfare programs could effectively decouple violent acts and payments and preserve much needed social and economic safety nets.

Still, money is fungible and experts concede that there is no ironclad way for either the U.S. or Israel to put in place a total ban on such payments. That said, there is more the U.S., Israel and other parties could do to report on this issue, generate greater transparency, and encourage other donors, including in Europe and among Arab states, to adopt measures that make it more difficult to use international assistance for such condemnable behavior.

Even here, Palestinians will defend their decisions about social welfare policies, saying allowances to families of “martyrs,” the wounded, or prisoners represent a larger ideal of defending their right of self-determination under conditions they deem to be occupation.

Many anti-incitement watchdogs and experts call for greater educational efforts and counter speech as a strategy for combatting incitement. Still, some experts say such efforts can backfire. For example, “when Arabs hear stories of the Holocaust, or Israelis confront reports of historical Palestinian suffering…they resent the accounts as instruments intended to elicit sympathy or weaken their will.5 See Shibley Telhami, Brookings Institution, 2014, https://www.brookings.edu/opinions/the-power-and-weakness- of-inciting-violence/

A group of Palestinian students visit to Auschwitz (Moment, 2014)